So, you finally decided you would like your own vegetable garden. You have planted a variety of vegetables, including tomatoes (which are technically a fruit). However, you’re faced with a problem: They simply won’t turn red. This is a common issue that occurs when the environment is not right for your tomatoes to ripen and go from being hard and green to succulent, juicy, and scarlet. You may wonder, why aren’t my tomatoes turning red? Instead of being frustrated with the tomato, you need to figure out what is wrong with their environment that is preventing them from ripening. Follow these basic steps to figure out what the root of the problem might be.

There are numerous reasons why tomatoes aren’t ripening, but the two main culprits tend to be the weather and the soil. If you live in an environment that has been experiencing weather hotter than usual, then it will take a long time for tomatoes to turn red. The majority of tomato varieties will grow for a period of 40-50 days, where they expand in size and remain green. After this point, they start to ripen and take on the colors known for their cultivar.

However, ripening is highly dependent on temperature. The majority of tomatoes need to be exposed to an environment that is between 68 and 77 degrees Fahrenheit. If it is hotter or colder, the ripening process slows and can even be stopped. The tomato even struggles to produce lycopene and carotene, the pigments responsible for the natural red color.

Besides the temperature, gardeners also need to pay attention to the soil. If a tomato is struggling to ripen and turn red, it is likely it is missing out on some much-needed nutrition. Tomatoes need a loamy or sandy soil that has adequate drainage. When given too much moisture or water, the tomato will struggle to grow properly and can take a long time to mature.

Likewise, tomatoes need to have soil that has a neutral or near-neutral pH. pH refers to how alkaline (basic) or acidic the soil is. A neutral soil will have a pH rating of 7, which fosters the best growth. If you are worried about tomatoes not ripening properly, apply some fertilizer and make sure the tomatoes are draining properly.

Why Aren’t my Tomatoes Turning Red: How to Ripen Off the Vine

When gardeners are dealing with tomatoes that seem unable to redden outdoors, they always have the option of bringing the fruit inside for the best results.

Tomatoes can be turned from green to red quickly and easily when brought indoors and exposed to the proper conditions. Before picking the tomatoes, though, be sure to give them a little squeeze. If the fruit has some give to it, then the ripening process has already begun and you can pick the tomatoes and bring them indoors to begin the process. The key to ripening tomatoes indoors is to encourage the fruit to produce ethylene. Ethylene is a hydrocarbon gas that functions as a regular maturation hormone for a variety of plants. It is ethylene that tomatoes and other fruits start to produce when ripening.

To encourage faster ripening, one way to turn green tomatoes red is by placing them in a bowl together and then covering the bowl with a regular dish towel. The ethylene becomes trapped and doesn’t disperse into the air, resulting in tomatoes that ripen fast and are ready for consumption. You can also place the tomatoes inside a plastic or paper bag.

Once you have brought your green tomatoes indoors, you can also encourage ethylene production and exposure by placing the fruit next to ripening bananas. Tomatoes and bananas both produce ethylene, and bananas that are browning tend to be some of the largest producers. If you have stubborn tomatoes, you can always place a banana in the bowl of tomatoes and leave it overnight. When you check the next morning, the green tomatoes will have started to turn red – if they had already begun ripening outside on the vine. For the best results with the banana method, choose a banana that is still yellow with a little bit of green on the edges. If the bowl doesn’t work, place the banana and a couple of tomatoes in a brown paper bag, and leave the bag in a location where it will be exposed to maximum sunlight. Avoid a region with high humidity as that will attract fruit flies. The tomatoes will ripen, and you can enjoy your beautiful red fruit.

Why Aren’t my Tomatoes Turning Red: Can You Encourage Ripening?

You maybe struggling to turn your tomatoes red outdoors. And have already made corrections to the soil, you might need to find a way to adjust the temperature. Bringing the fruit indoors is typically the best option, but you can try to facilitate growth by placing blankets around the roots of the tomatoes. The blanket will help warm the plant by several degrees, combating the threat of weather that is growing too cold.

If your problem is that the temperature is simply too hot for tomatoes to ripen, and you don’t want to pluck them from the vine, then your only available solution is to wait. The temperature will need to drop eventually, and the tomatoes are not facing any harm from being exposed to the heat. Just remember to check the fruit on a regular basis. Avoid the temptation to pluck them and make fried green tomatoes instead of waiting for nature to take its course. 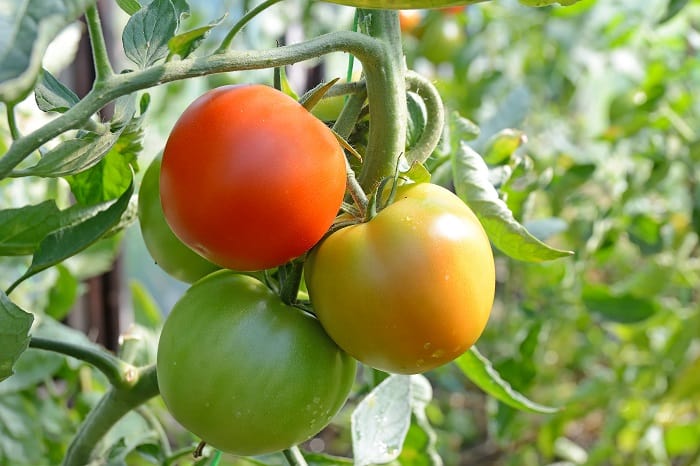 Tomatoes are a delicious fruit, and it can be frustrating when they don’t turn red. The changing of color is a sign of maturation and ripening that means the tomato is ready to eat. Unfortunately for many gardeners, factors out of your control like the average temperature of the climate are often the cause for tomatoes that refuse to ripen. If you live in a cold area, bring the fruit indoors and allow the tomatoes to ripen on the counter. If it’s too hot, all you have to do is wait. The tomatoes will ripen at their own pace, and you will soon be able to enjoy delicious salads and sauces.

How do you make green tomatoes turn red from the vine?

If you have tomatoes that turn red on their own and you need them to stay that color, here are some tips.

To turn green tomatoes red from the vine, you need to remove all of the green leaves and stems from them. You can either do this by manually removing all of these leaves or you can use a tomato planter that has a knife blade at one end for easy cutting; this works well for larger plants that have long vines and many smaller clusters of tomatoes. You can then use vinegar to kill any bacteria on these leaves and stems, which will prevent them from turning brown when exposed to air. The second step involves covering each individual tomato with aluminum foil.

Can you pick green tomatoes and will they turn red?

Green tomatoes can turn red when they are exposed to the sun. This experiment aims to see how long it will take for green tomatoes to turn red after being picked.

The answer is approximately 6 hours, but it may take longer depending on the time of day, type of soil, and temperature.

In the United States, the month tomatoes are ripe is August. In Canada, it is July.

The season for picking tomatoes in Europe starts in July and ends in October.

Will my tomatoes ever turn red?

The changing colors of tomatoes is a complex and interesting process that happens on two stages, first it starts as green then it turns yellow and red. The green color is due to chlorophyll molecules in the plant cells that absorb light and make the leaves visible. As they ripen, the cells split and chlorophyll breaks down releasing all that light energy into heat, causing them to change colors.

A lot of tomato varieties are genetically modified for different colors like pink or orange ones and also for taste such as sweet or spicy ones.

Why tomatoes are not ripening on vine?

Tomato fruits are green because they do not contain a lot of sugar and the cells in their epidermal layer absorb light, preventing them from turning brown. The cells need to break down, but they cannot break down while they are still green. As soon as the fruit starts to change color, then it will also start to ripen.

How often should I water tomatoes?

When it comes to watering tomatoes, there are thousands of ways to go about it. However, the most important thing is that you should use a consistent and frequent method.

The best time to water tomatoes is in early morning or evening because the soil has dried out and water drifts into the ground easily. You can also place a saucer with water on top of your tomato plants so they will get some misting every now and then.

When you want to know how often you should water your tomato plants, you need to find out where they get the most sunlight. The best time to water them is when they are thirsty and getting lots of light!