Learn how to choose the best Poison Ivy killer and the best ways to get rid of it. Unfortunately, when poison ivy settles in your yard, it can become a menace. The easiest way to eliminate it is to use a poison ivy killer. But with so many on the market, how do you find the best one? Well, this guide has looked at three of the best options and figured out which one is the safest and most effective. Take a look and see which one will work for you.

It’s time to be honest about yard ownership. As much fun as it is to have a luxurious plot of grass with maybe some carefully cultivated flowers and vegetables, having a yard still comes with numerous responsibilities. Perhaps one of the most important is preventing the growth of pests, especially ones that are damaging and harmful to the people who live in the home.

Perhaps the most annoying and pernicious pest is poison ivy. This plant is well known for the chemical it secretes, which induces an allergic reaction in most humans and causes rashes, itchiness, and trouble breathing. Although a lot of animals aren’t affected by its chemical secretions, it’s important for humans to stay away because of the reaction.

Reasons to Use a Pesticide

A lot of people try to avoid using pesticides and herbicides, but sometimes the situation becomes so dire that it is necessary. While there are a couple of homemade remedies people can try, they usually don’t have the lasting results that using a genuine herbicide does.

Herbicides tend to attack not only the visible stems and leaves but also reach down deep into the soil to attack the roots and stop the plant from growing back. The pesticide will additionally target any offshoots of the primary poison ivy plant, meaning it will eliminate any smaller versions that have started to grow in the nearby area.

How to Use a Pesticide

If you choose to use a pesticide or herbicide, remember to read all of the instructions and double-check the ingredients. You want to make sure that you are using the product correctly to prevent damage, potential injury, and other unpleasant situations.

As a general rule, never spray around children, pets, and other living things. Try not to inhale and rinse and wash immediately if you accidentally spray or get liquid on yourself. The ingredients that are poisonous to poison ivy are also hazardous to humans. When possible, wear gloves.

After the herbicide has been sprayed, do not allow children or pets near the area for the next 24-48 hours, or however long the product directs. This is to ensure none of the poison is transferred while it is fresh.

Best Ways to Get Rid of Poison Ivy

If you are still wary of using an herbicide, it is possible to use a natural, homemade remedy. However, these tend to be less effective and will require more work on your end. Perhaps the simplest is pouring boiling water on the main stem of a plant. This will kill not only the growths you see but can also reach into the soil and burn the roots.

There are some alternative methods, including making an herbicide composed primarily of vinegar and dish soap:

Another version of this mixture replaces the vinegar with salt, which people are more likely to have around the home. The same basic rules apply, so the water needs to be boiled, and then the salt slowly mixed in. Once the mixture cools a little bit, you can then mix in the soap and go to work spraying.

Finally, there is one more version. This one is more caustic but uses the same ingredients. Instead of using a gallon of water, you instead use a gallon of vinegar and then mix it with 1 cup of salt and the liquid dish soap. This mixture has a strong scent but is highly effective and acidic.

Of course, you can always put on gloves and protective clothing and dig the poison ivy out by the roots so it doesn’t come back. However, this takes physical effort and comes with the risk of developing a rash from contact with the plant.

Check Out These Potent Pesticides

This Bonide Products 506 is an easy to spray bottle of poison oak and ivy killer that can be applied directly to the roots and stems of unwanted growths. The main ingredient in this herbicide is dimethylamine salt, which dries out poison ivy and oak and kills it over a period of several days. You should wear gloves when using this herbicide because you will need to get close down to the roots of the plant.

This herbicide starts working overnight but may need up to four weeks to eliminate an entire patch of poison ivy. There needs to be enough time for the herbicide to dry before it rains for it to be the most effective. Unlike many other options, Bonide Products 506 is safe to use on grass, so it will kill poison ivy without affecting the lawn. It is also effective against common weeds like dandelion, thistle, clover, ground ivy, ragweed, creeping charlie, chicory, and stinging nettle.

Each bottle contains 32 oz. of herbicide, which is enough for multiple applications. 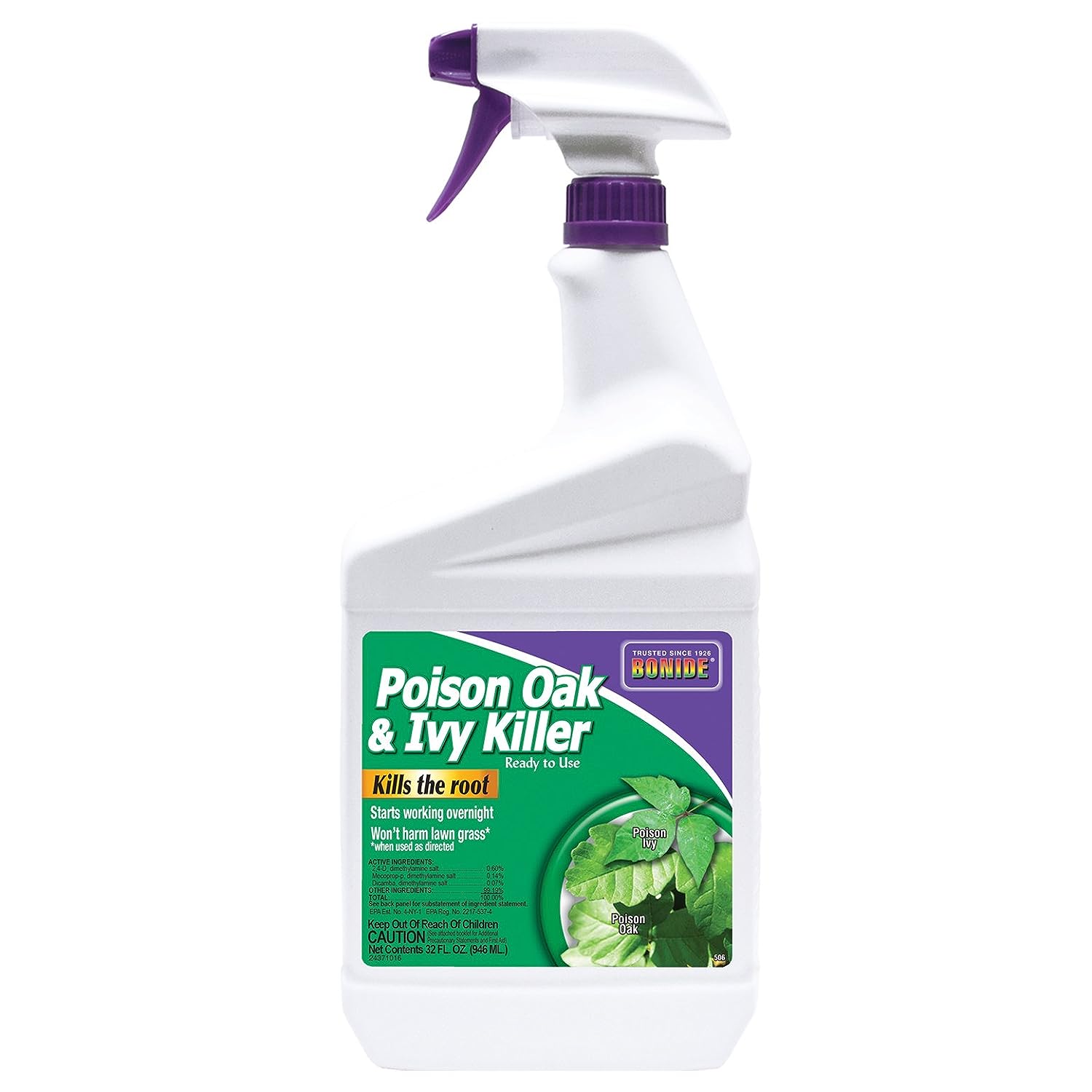 One of the main benefits of this Roundup 5203980 is that the herbicide can kill annoying tough brush in addition to poison ivy. This product comes in a large container and includes a special spraying nozzle that is held separately and allows for a more direct application of product to stems and roots. Each container holds a whopping 1.3 gallons, which means there is enough for numerous uses or to treat a large patch of poison ivy.

The main ingredient in this herbicide is glyphosate, which is made to penetrate waxy leaves and reach down into the center of the poison ivy. This herbicide can be sprayed directly on leaves or can also target roots when applied further down. It is recommended to wear gloves when using this product because users need to get close to the weed.

Roundup 5203980 can be used directly on vines and works well on growths that have climbed up fences, buildings, and mature trees. It becomes rainproof in 30 minutes and starts to kill within 24 hours. 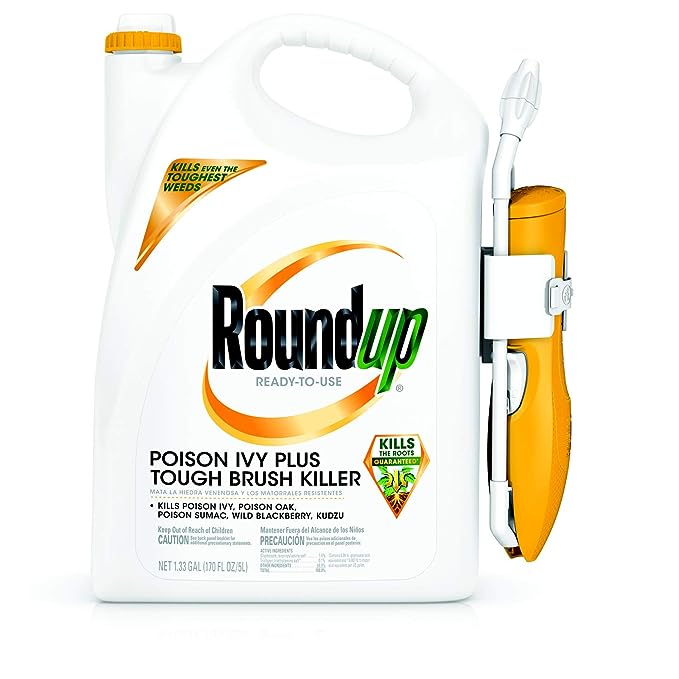 This Green Gobbler Vinegar Weed & Grass Killer is an excellent option for individuals who are still uncomfortable with the thought of using stronger herbicides. The primary ingredient is vinegar, which is highly acidic and can destroy the stems and roots of poison ivy. The only downside is this works on grass and crabgrass as well, so it needs to be applied with care. This is packaged is an easy to use bottle with a sprayer that can be screwed into the top.

The Green Gobbler works within several hours and becomes water-resistant and waterproof in less than 24 hours. This is a desiccant, which means it dries out the stems and leaves as a form of destruction. The formula is effective on other weeds as well, including crabgrass, dandelions, clover weeds, white clover, and moss. 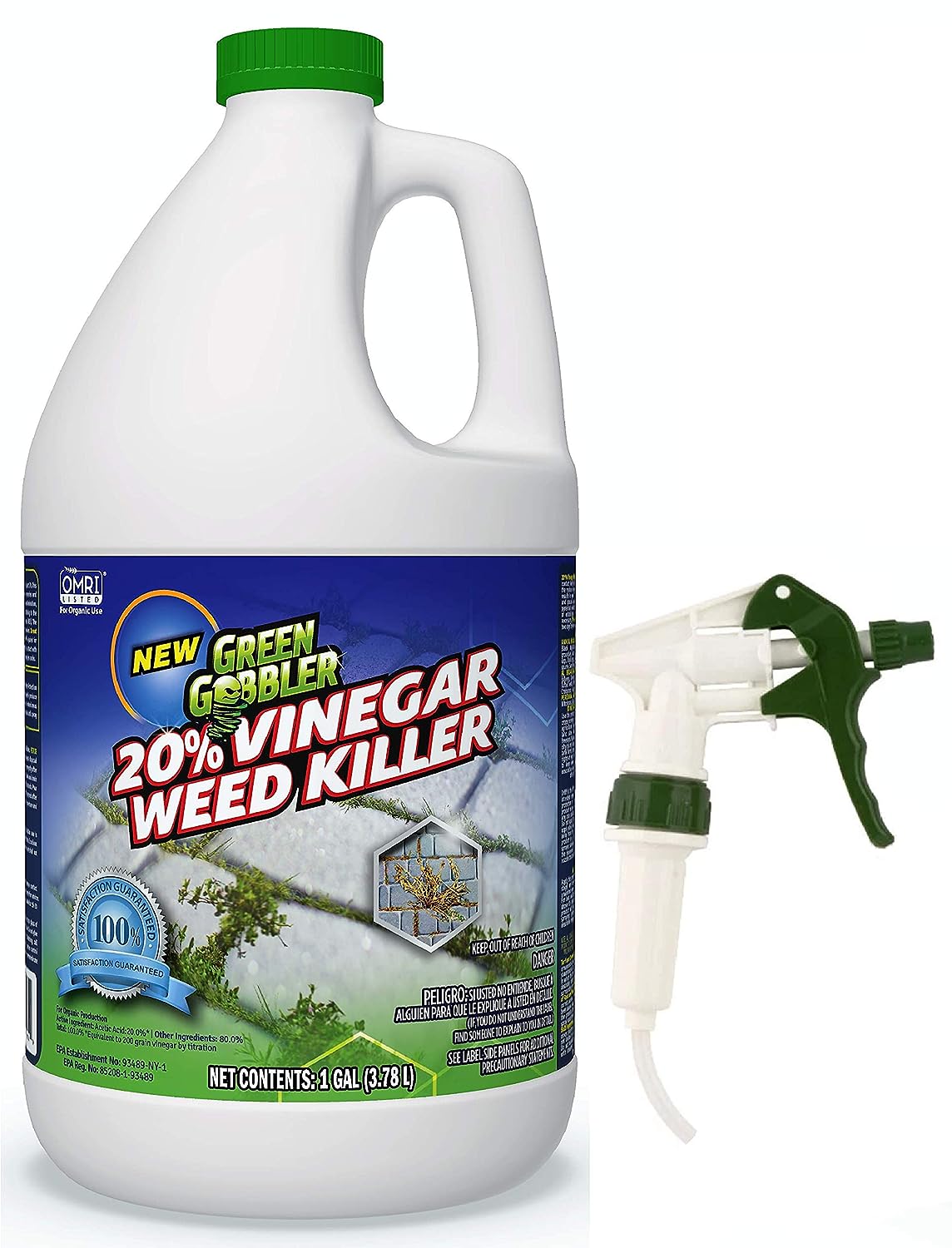 Although all of these poison ivy killers are great, the absolute best one is the Roundup 5203980 Poison Ivy Plus Tough Brush Killer because it is tough, the easiest to use, and comes with a guarantee from the manufacturer. All you have to do is use the spray applicator and target poison ivy plants directly around the roots. Plus, this herbicide works on other common weeds, so you never have to worry about invasive plants again.

What is the best poison ivy killer on the market?

If you are one of the many people who have suffered from the occasional bout of poison ivy, then you know how difficult it is to determine what is the best poison ivy killer on the market. It can be hard to figure out which one is best when there are so many different options available.

There are a number of different kinds of poison ivy killers that are available on the market. Some people prefer to use chemicals, while others swear by natural remedies. This is a question that can only be answered through trial and error.

Each product has its own benefits and drawbacks. It is up to you which poison ivy killer to choose from since it will ultimately depend on your personal preference.

The best poison ivy killer for most people is called Ivy Plus Plus. This product protects users from getting contact with the plant and has been proven to work on most types of poison ivy. Poison Ivy Plus Plus (PIPP) offers a natural alternative that kills all types of poison ivy. It is a plant-based cream made with a refined sugar, water and glycerin - three ingredients that make it safe to use around children and pets.

Poison Ivy Plus Plus also offers organic nontoxic ingredients such as tea tree oil, lavender essential oil and aloe vera gel. This product can kill all types of poison ivy on contact because it has an active ingredient called neem oil which is one of the most powerful plants against this plant.

Why use a professional grade poison ivy killer?

Poison ivy is a highly contagious plant. It is notorious for its potential to cause irritation and itchiness in humans as well as animals. If you are looking for a solution to control this plant, there are a few ways you can go about it. You can use an industrial grade poison ivy killer which is designed to break down the woody tissue of the plant or you can use an organic herbicide with similar properties.

This professional grade product eliminates the need for other treatments because it kills all three types of poison ivy - black root, red stem, and white leaf. This means it can be used on all ages and any type of skin!

If you are planning to purchase a professional grade poison ivy killer for your garden, you should be aware of the following factors.

-What is the difference between a professional grade and an industrial grade pesticide?

-Is there a difference in quality between a professional and an industrial grade pesticide?

-What is the purpose of buying the pesticide?

-How can professionals use it in their homes or gardens?