In this article, we will be taking an in-depth look into the history, health benefits, uses, and the best way on how to store cilantro. Read through till the end to learn a little more about your favorite vegetable.

Cilantro is an Apiaceae just like parsley, carrots, and celery. The herb is edible and is packed with a lot of antioxidants that are beneficial to the body. It also serves as a great way to spice your dishes.

How to Store Cilantro: What is Cilantro?

Cilantro is an annual herb that can be found in many parts of the world. It belongs to the Apiaceae family with other nutritious vegetables such as carrots and celery. The herb has a strong enticing taste that makes it a great addition to soups and stews. Native to parts of southern Europe, the herb is also commonly referred to as Coriander and Chinese parsley in parts of Asia.

The history of coriander dates back to 6,000 BC during the reign of the Egyptian Pharaohs. In a recent discovery traces of cilantro, remnants were found in a cave in Israel and in parts of ancient Egypt.

Cilantro was first used in modern civilization by early British settlers in North America during the 1670s.

Cilantro is grown abundantly in the United States in the states of California, Arizona, Washington, and Oregon. As an aromatic plant, all parts of the plant can be eaten, but the leaves and seeds are the most commonly used parts of the plant. The flowers of the plant mostly appear with white petals but they can also be pale pink depending on the soil conditions. 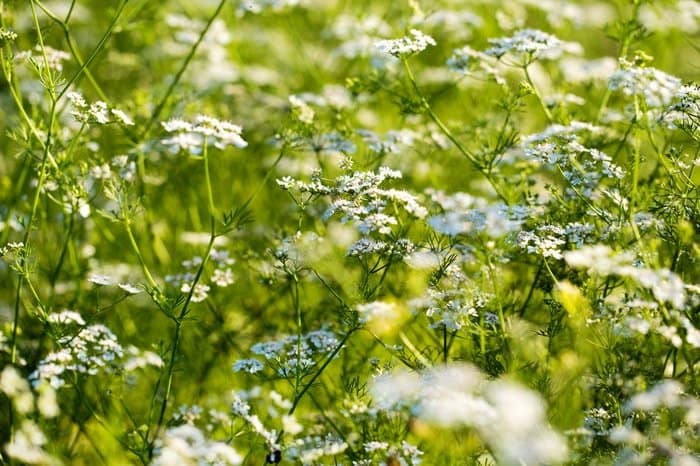 One of the many problems with cilantro is that it can be difficult to preserve especially if you have them in large quantities, but with the right methods, you can keep your vegetables fresh for whenever you need them.

How to Store Cilantro: Health Benefits of Cilantro

Cilantro is packed with antioxidants and vitamins that play important functions in the body. It contains vitamins A, C, K, including fat, carbs, and protein. Coriander also contains trace amounts of potassium, manganese, choline, and folate. It also contains the antioxidants lutein, beta-carotene, zeaxanthin, and beta-cryptoxanthin. Some of the many benefits of cilantro include:

In a study conducted on rats, it was discovered that cilantro helps to suppress lead accumulation in their system. This shows that the plant may be a healthy way to reduce heavy metal toxicity in the body.

Serves as a Natural Preservative

When added to other foods, it was discovered that cilantro help to inhibit oxidation which delayed the time it takes for the food to spoil. The compound dodecanal found in the seeds and leaves plays a major role in the ability of the plant to kill Salmonella.

The essential oils in coriander serve as a natural antifungal that helps to fight infections and reduce the side effects of other treatments. It contains carotenoids a strong antioxidant that helps to reduce the risks of eye disease and certain forms of cancer.

In a 2015 study, it was discovered that coriander extracts had the possibility of protecting the skin against Ultra Violet (UV) radiation that could lead to photoaging.

There are claims that cilantro possesses analgesic and inflammatory properties that could be useful in reducing pain in the body.

How to Store Cilantro: Uses of Cilantro

Cilantro has a lot of dietary usage due to its ability to add flavor to any dish or beverage. It is also free from extra fat, calories, and sodium making it a great vegetable for weight loss. The leaves are edible and can be eaten raw or half-cooked in order not to lose its medicinal properties and flavor. The vegetable is used

How To Store Cilantro

One of the many problems with cilantro is in its storage. As a grower, it can be difficult for you to allow all that coriander leaves to go to waste. With the right storage methods, you can preserve your cilantro for weeks and even months for use at a later time. Without much effort, you can store your cilantro by:

You can preserve your cilantro by keeping the leaves dry. After harvesting them, you should not rinse off the dirt or debris so as not to get them wet.

Then you have to trim the ends of the leave and tie bunches at the ends of the stem. You will need to hang bunches in an upturned position. You can do this by using a twine to tie the bunch to a hook or hanger.

Remember to hang them in a warm place away from direct sunlight where the leaves can get discolored. 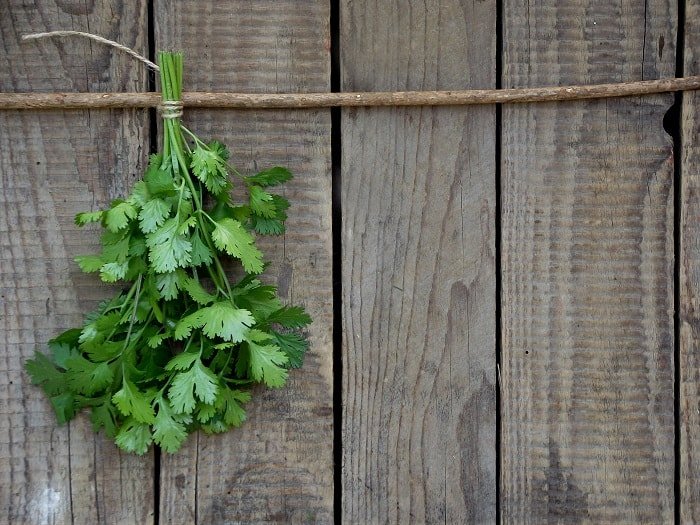 You can store your fresh cilantro leaves in an ice tray for use in flavoring beverages. After harvesting the vegetable, you will need to rinse and drain the cilantro of excess water. You can now chop the flowers into small pieces with the aid of a knife before placing them in an ice tray.

Each slot on the tray should contain an even amount of chopped cilantro. Afterward, you can then cover the tray in water and freeze until they become ice. When ready for use, you can now use the ice to flavor beverages or allow melting for use in cooking.

3. Storing Cilantro in the Refrigerator

One of the best ways to store fresh cilantro is to refrigerate them. Once harvested, you need to trim the stems and keep the leaves dry. This means that you don’t have to rinse the leaves for dirt and debris before storage until the leaves are ready for use.

You will then need to fill a jar with a small amount of water and place the leaves with the freshly cut stem facing the bottom of the jar.

Using a plastic bag, loosely cover the herbs and endeavor to secure the bag in place. Covering the bag helps to avoid direct access to air that can speed the oxidation.

You can now keep the jar in the refrigerator until the leaves become discolored and wither. You will need to change the water in the jar periodically preferably after every 3 days.

If you have been thinking of growing cilantro in your garden and are worried about how to preserve the vegetable after harvest, with the methods above, you shouldn’t find any problems keeping your favorite spicy vegetable for whenever you require it in your dish or beverage.

Should I wash cilantro before storing?

We do not recommend washing cilantro as it can cause a loss of potency.

Cilantro is an herb that is commonly used in Mexican, Asian, and Mediterranean cuisine. It is often considered to be more pungent than its cousin, coriander, which makes it essential for dishes like salsa verde. However, if you decide to wash your cilantro before storing it, the herbs will lose some of their potency and flavor.

How long can cilantro last in the fridge?

Cilantro can last up to two weeks in the refrigerator before it starts to lose its flavor and texture.

What are black spots on cilantro?

Black spots on cilantro are caused by the presence of bacteria that are in the soil surrounding it. They can also develop from over-watering or too much sun exposure.

Cilantro is a popular herb that is often used as a garnish for Mexican and Asian dishes and salads. While this herb has become more common in kitchens all around the world, it also poses certain hazards that need to be addressed. Black spots on cilantro can cause foodborne illnesses if not addressed early enough and are often confused for mold or other contaminants in foods.

Are you supposed to eat the stems of cilantro?

The answer to this question is no. It is not good for your health and it could even be dangerous.

Despite the fact that some believe that the stems of cilantro should be eaten, they are not good for you. In fact, they contain a toxic substance called thiocyanate, which could lead to lung damage and kidney failure with prolonged exposure.

How do you store cilantro long term?

There are a few different ways to store cilantro. It can be used fresh, dried or frozen. It is best to use it fresh in salads and sandwiches.

Fresh: The easiest way to keep cilantro is by storing it in an open container with a small amount of water so the leaves can stay hydrated.

Dried: Drying the leaves can also keep them for a long time - about two weeks if kept in an air-tight container at room temperature.

Frozen: If you freeze cilantro, it only lasts about two months but you will be able to use it as much as you like because it will thaw quickly when you need it.

How do you keep cilantro fresh in paper towels?

Cilantro is a popular herb to use in many dishes. It can be used in salads, tacos, salsas and more. However, when you store cilantro leaves in paper towels it might turn soggy and unusable.

How do you keep cilantro in the fridge without plastic?

If you want to keep cilantro fresh for up to four days, wrap it tightly in moist paper towels and store it in a container with a tight lid.

Do not store cilantro near acidic or salty foods that could leach its flavors.