When it comes to the native plants of Spain, the country is a treasure chest with between 8 and 9 thousand species, of which more than a quarter are endemic  – not found anywhere else. Spain also has a long history, so some species, such as the national flower – the red carnation, may or may not be indigenous to Spain! People have been moving things around the Mediterranean for a long time. Join us on a voyage through a few remarkable plants for the botanical treasure chest that is in Spain.

The Native Plants Of Spain

As we have already mentioned there are between 8000 and 9000 species of native plants in Spain. This is a 1000-word article, so naturally, we are going to pick and choose a few exciting ones to talk about! Spain is also a lovely place to keep honeybees!! And I am a beekeeper. So my bias will naturally be toward some of the incredible plants that produce amazing honey in Spain. The world needs bees, so, if you are going to plant trees, plant things that bees can use!! (For more on bees visit https://beekeepertips.com/ where we help you understand how to work with bees in your life).

What Is An Endemic Species?

An endemic plant is a plant that only grows in one country. This is actually a rather silly idea. Plants are apolitical. They don’t care about our ideas of countries at all actually and will quite happily jump over a border without a passport. The concept of a species being “Indigenous to the USA, Canada, Brazil, Russia or China” as an example is very problematic!! These are gigantic countries composed of many distinct separate biomes.  Any species moved out of its natural range can become invasive! Hence it is possible to move a plant from the East Coast of North America to the North West Coast and have it become an invasive species in a country where it is indigenous. It is still indigenous to America, but it is in fact exotic to the new location.

In some areas, even moving a plant twenty or thirty miles can move it from one river basin to another, and it can actually become an invasive species in the new river basin. These are called “extralimital species” but they are in fact invasive pests.

In terms of the native plants of Spain, the country has a very high level of plant endemism – 25% of plant species found in Spain are only found in Spain. This also means that Spain has a lot of species that are threatened with extinction. Spain has a nice climate – so as people cover more and more of Spain in greenhouses, retirement homes, shopping malls, parking lots, and golf courses, species will vanish leaving our world poorer.

The Strawberry Tree, Arbutus unedo, is one of my favorite native plants of Spain because it produces one of the most delicious monofloral honey types I have ever tasted. Spanish Strawberry Tree honey is just amazing. The Strawberry tree is an evergreen tree that grows throughout the Mediterranean region, and into parts of Europe as far north as Ireland.

The tree is beautiful and has bright and in my opinion delicious fruit. In terms of planting this tree outside its range – if you want to create a Spanish-type garden with a nice evergreen tree, then this is definitely one of your choices!! This tree will tolerate a bit of frost and can grow in USDA zones 7 and warmer!! The great thing is that it brings beauty to your garden and nectar to the bees! In terms of native plants of Spain that you can grow in a Spanish-style garden this one really is a winner. 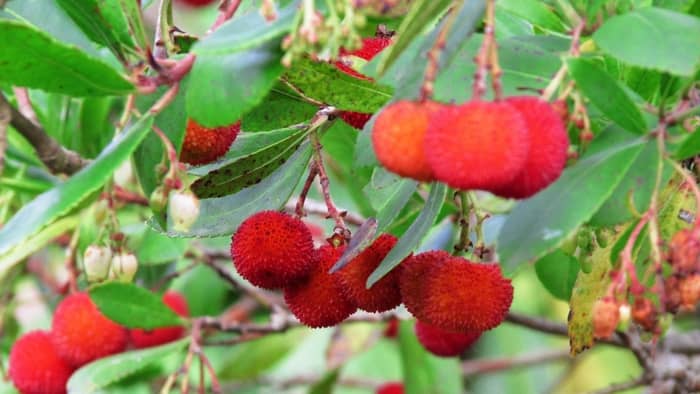 I recently had a misfortunate incident where my Muscovy ducks got into my herb garden. I collect herbs, as herbs are one of our special tool kits for keeping healthy and strong! The cursed ducks ate my Spanish Sage plant, my Basilic, and my Syrian Oregano! I must say that it makes the duck taste good if they actually eat herbs… Now I have fewer ducks and no Spanish Sage.

Spanish Sage is one of those herbs that if you have grown it you will always want to grow it. It has an exquisite aroma and my favorite use for this plant is when I barbeque meat. I pack herbs, including this (until recently), perennial basil, basilic, oregano, dhania, thyme, and rosemary around the meat, and then start barbequing it on oak wood. Once the meat is nearly done, you can take all the herbs off and throw them on the coals – the herb smoke on the meat is incredible.

This plant thrives on neglect. They can be killed by overwatering, along with most other Mediterranean herbs. Spanish sage, Salvia lavandulifolia, is just an amazing plant! See if you can find it or order it. It grows easily from seed which is for sale here.

And of course, let’s not forget that bees enjoy the little purplish flowers!! 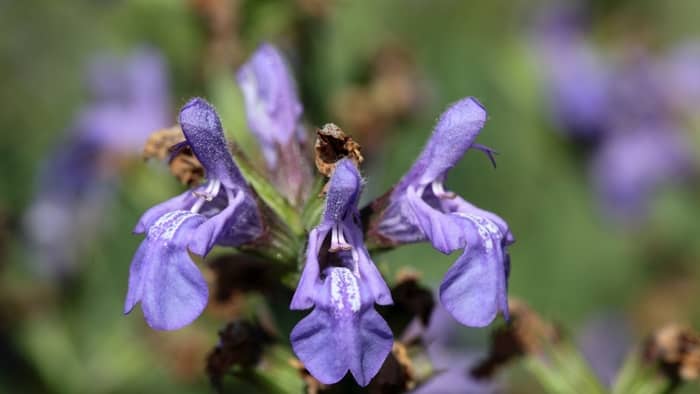 This is the real golden child of Spanish botany! Saffron can fetch absolutely stupid prices per gram. It is actually really easy to grow if you have the right climate, and if you do not, you can grow it in pots! You can buy the plants here. If you are lucky. They sell out so fast. I am on a waiting list to get Saffron corms from a local supplier – and have been for five years! 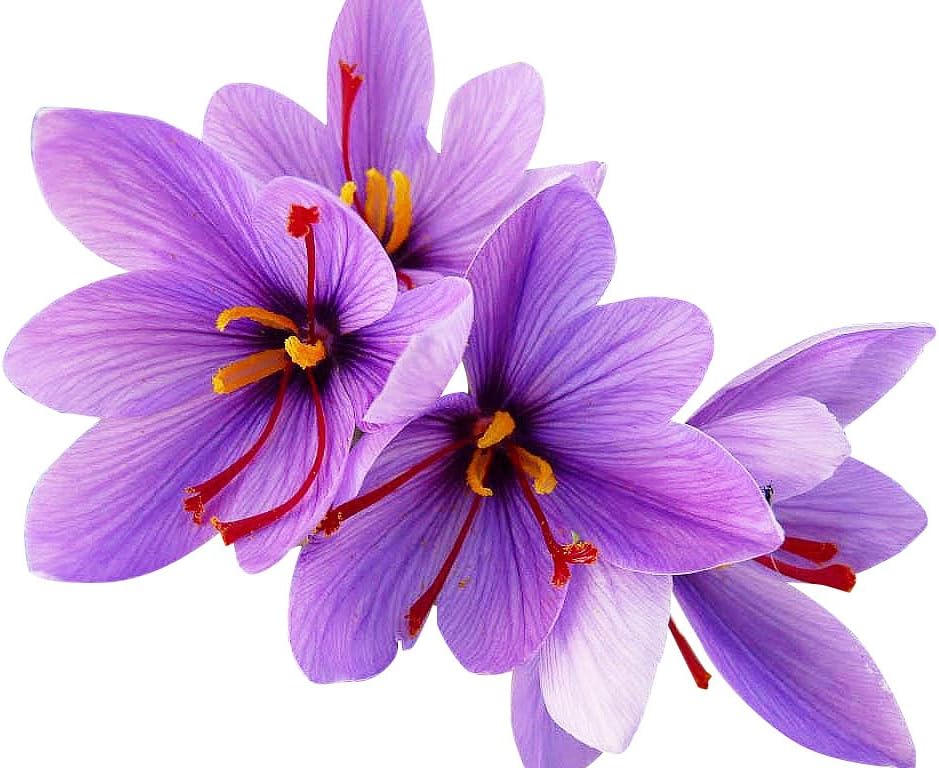 If you harvest the stigmas of the flowers early in the morning, they have an incredible flavor! They multiply each year, so if you start with a few, within a decade or so you will be able to produce at least a thousand dollars worth of delicious Saffron. This herb is so expensive that it is actually difficult to cook with it – but if you grow your own, you can be much more generous with how much you use!!

And Last, But Definitely Not Least, The Red Carnation

The red carnation may be one of the native plants of Spain. We don’t really know because this flower was so beautiful that people moved it around before they really recorded species origins. But we do know that the Red Carnation is the national flower of Spain where it symbolizes something inherently Spanish. You can see that the internet troll farms pumping out endless SEO optimized articles/clickbait have been trying hard to come up with various original reasons for this being the national flower of Spain. Ranging from Mothers’ love to bullfighting to looking nice in front of white buildings, the stories are abundant!

Whatever the reason, the Red Carnation is a very beautiful plant to grow! The really funny thing is that this plant is so beautiful, and has been cherished by humans for so long that we don’t even really know if it is in fact indigenous to Spain at all!!

The actual species name is Dianthus caryophyllus. These thrive in well-drained neutral to alkaline soils and again, as with many Meditteranean plants, thrive on a bit of water neglect. Do not overwater carnations!!

I hope this has inspired you to consider growing some of the native plants of Spain in your garden! A Spanish herb garden will add a lot of health and enjoyment to your diet! A Strawberry tree or two will help your local bees, and who would say no to having a nice bed of Carnations! If you enjoyed this article please share.

Do Acers grow well in Spain?

There are many species of Acers and some do grow exceptionally well in Spain. Acers such as the Japanese Maple grow well in most of Spain and add pleasant leaf shapes and patterns to the garden, together with spectacular fall coloration.

Why is the red carnation is the national flower of Spain?

The theories range from mothers love, to red for bull fighting to some rather exotic things we shall not mention here. The most likely reason is that the flower grows well in Spain, is popular and symbolises that Spanish passion.

What can you grow in a Spanish garden?

This will depend on the size of the garden, but you can always start with Spanish herbs! Spanish sage, Rosemary, Thyme, Oregano and Crocus (Saffron) will add beauty, bee forage and health to your diet! You could also grow bigger trees such as various connifers, strawberry trees, and of course a patch of carnations for some colour!

Does Spain have evergreen trees?

Yes. The Strawberry tree is an example of an evergreen Spanish tree. The various connifers in the Iberian Connifer forests are also evergreen.