Here we will tell you the list of determinate and indeterminate potato varieties. Depending on where you live, the potato might seem like the simplest and most straightforward of fibrous tubers. This delicious starch – since the potato is not a vegetable – has been a staple of European and American cuisine for hundreds of years because of its easy to grow nature, durability, and nutritious skin and flesh. However, gardeners frequently underestimate the potato and don’t realize its simplistic nature hides not only a world of flavors but also one of the differences and complex growth patterns.

When growing potatoes, it’s important to determine whether the desired variety is determinate or indeterminate. Potatoes need to be grown from what’s called a ‘seed potato,’ which is part of a potato that contains an ‘eye’ that will grow and become a vine.

When the vine grows, the plant develops thick roots that will become tubers. These tubers are delicious potatoes. However, whether a potato is determinate or indeterminate will affect how much the potato grows. Since it can be difficult to find this information, this list forms an ultimate guide to the different varieties and includes important growing advice for all types.

The most complicated part of attempting to grow potatoes is figuring out whether a species is determinate or indeterminate.

Determinate potatoes are more difficult for many amateur gardeners. These fast-growing options produce tubers around soil depth and slightly above where a seed was planted. All of the tubers grow in one layer, so you don’t have to worry about mounding, or adding more soil to the top to get more tubers.

Determinate potatoes produce early, after 70 to 90 days. They can be planted in only 4 in. of soil, making them excellent for gardeners will little space Because they grow fast, these potatoes tend to be a bit smaller than their indeterminate counterparts, but are still healthy, delicious, and nutritious.

To best grow indeterminate potatoes, it’s important to understand the bag growing process. Here, the starting tubers are covered with 4 in. of loose soil and allowed to grow up to 6 in. tall. They are then covered in several inches of soil, straw, or dead leaves so only 2 in. of the plant is exposed at the top of the mound. This process repeats each time the tubers start to emerge on the surface, so more and more layers of potatoes are grown.

If you are unsure about the best way to grow indeterminate potatoes, consider investing in a box, tower, or bag that helps keep track of the tubers. More soil can be added to the container as needed to enjoy the harvest. You will be able to grow up and instead of out, resulting in good yield and healthy potatoes.

The Best Varieties for the Average Gardener

Potatoes are a simple and easy crop to grow, but most gardeners will have better luck trying to take care of determinate varieties until they have the experience and equipment necessary to keep indeterminate ones happy.

Determinate potatoes can be planted in a mere 4 in. of soil, making them an excellent choice for those with small yards. They also have lower yields, so you won’t wind up with a pile of potatoes growing bad in the yard at the end of the season.

When picking a determinate potato to grow, the most popular types are:

The flavor and overall starchiness vary, but these potatoes are consistent and as delicious as any other. Some, like the Ratte, are considered more of a delicacy because of their small and finicky nature. Others, like the Yukon Gold, are easy to grow and make amazing mashed potatoes. Remember to do some research about taste and consistency before picking the ultimate tuber.

Indeterminate potatoes are loved by farmers, companies, and serious gardeners because they can grow upwards and produce tons of edible tubers. Because of their popularity, there are numerous varieties available to the average individual. Many have different tastes and textures and grow well in certain climates, so it’s important to research a variety before settling on it. Some of the most common and delicious are: 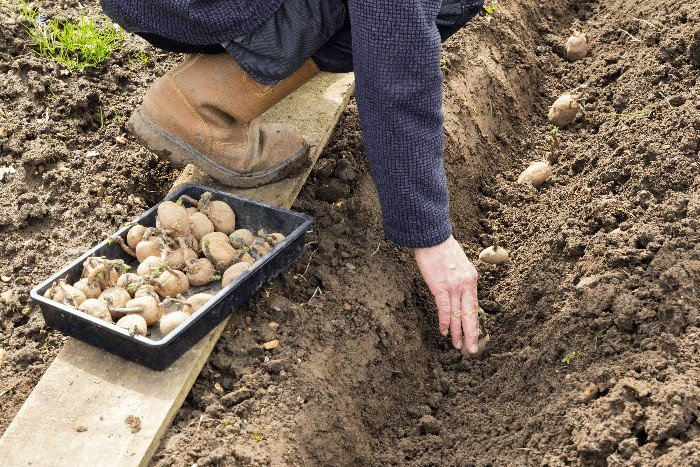 Remember that some types will be regional or are better adapted for warm or cool climates. If you can, figure out which indeterminate potatoes are popular in your region, since they will most likely grow the best.

Trying to figure out whether a potato is determinate or indeterminate can be frustrating, especially since there isn’t a master list that will let you know what’s what. Luckily for the average gardener, this is the ultimate list of determinate and indeterminate potatoes that explains what each one is and which varieties you can choose from. Once you find the right potato for you, be prepared to enjoy mashed potatoes, french fries, purees, chips, and other deliciousness.